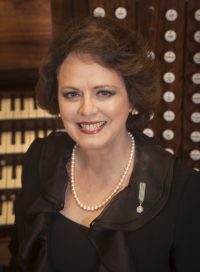 “Lynne Davis played with precision and ‘le bon gout.’ Her sense of style was excellent and she clearly showed her mastery of all the French-style ornamentation.” ~The Calgary Herald

Though American by birth, Lynne Davis’ career has been steeped in French music, culture, and style. Her career was launched by taking First Prize at the 1975 St. Albans International Organ Competition in England – the eighth organist to receive that honor since the competition’s founding in 1962. Now a leading international concert artist and master teacher, she has performed in nearly every cathedral in France, numerous major cities throughout Europe, and from coast to coast in the United States. Her activities have included being a featured performer and lecturer at two national conventions of the American Guild of Organists, a member of Chartres, Dallas, St. Albans, Taraverdiev (Russia), and Montréal international organ competition juries, and giving master classes and lectures about French organ literature and its history.

From the late 1970’s until 2006, Lynne Davis made France her home, having married Frenchman and Chartres International Organ Competition founder Pierre Firmin-Didot. The couple played a major role in the French organ music scene, initiating among other things the famous 1992 exhibition and recording of “Les Orgues de Paris”. Her unique living and vast working experience as well as her lineage of study in France makes her an authority in all French organ repertoire and many other European composers.

She holds the “Certificat d’Aptitude de Professeur d’Orgue” awarded by the Republic of France. A highly regarded teacher, she served as organ professor at the Conservatory of Music in Clamart, near Paris from 1990-2006 and from 1997 to 2006 at the French National Regional Conservatory in Caen in Normandy. In 2006 she returned to the United States and that summer was appointed Associate Professor of Organ, holding the Robert L. Town Distinguished Professor of Organ chair at the Wichita State University School of Music in Kansas. In addition to heading the organ program, she is producer and artistic director of the Rie Bloomfield Organ Series, “Distinguished Guest Artists”, and the “Wednesdays in Wiedemann” series she created in 2007 (for which she performs monthly half-hour organ recitals) which are videotaped for YouTube.

Lynne Davis’s recordings include discs, radio broadcasts and live performances, including those on the famed organ at Chartres Cathedral. Her disc, “Musique pour Cathédrales”, released on the Quantum label, won the coveted 5 Diapasons award in France. Other Chartres recordings by Ms. Davis include Jehan ALAIN et Maurice DURUFLE and a varied program of Raison, Bach, Vierne, Roger-Ducasse and Litaize. “Lynne Davis en Concert” was made on the world-renowned Cavaillé-Coll organ at the church of St. Etienne in Caen in Normandy. Her most recent CD, is “Lynne Davis at the Marcussen organ in Wiedemann Hall” at Wichita State University was released in 2010. All of her recitals at Wichita State University since 2006 have been recorded “live” and are archived there.

Ms. Davis graduated with honors in organ performance from the University of Michigan where she studied with Robert Clark. Shortly thereafter, she moved to France and for eight years she studied with Marie-Claire Alain. While there she also studied with Jean Langlais, Maurice and Marie-Madeleine Duruflé, André Fleury, Gaston Litaize, and Edouard Souberbielle and partook in classes with numerous other great European master organists.

In 2011, Lynne Davis received the Excellence in Creativity Award from Wichita State University. Following the immense success of the American Alain Festival which she organized at Wichita State University to celebrate the 100th anniversary of the birth of Jehan Alain, she was awarded as a French citizen the prestigious distinction of Chevalier de l’Ordre des Arts et des Lettres from the French Ministry of Culture and Communication in 2012. In 2013, she received the medal of the city of Wichita from Mayor Carl Brewer and in 2016, the Burton Pell award from the Wichita Arts Council.